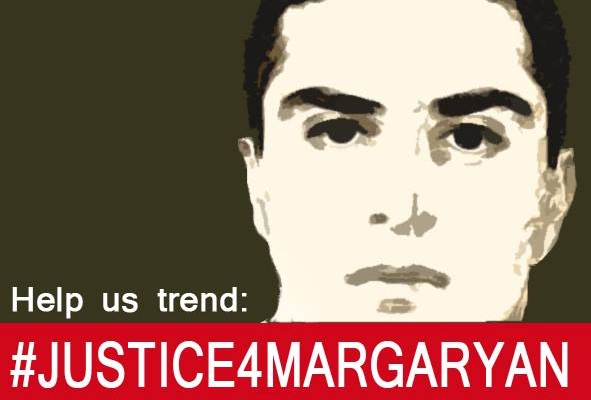 On January 11, 2004, Gurgen Margaryan left for Budapest, Hungary, to participate in a three-month English language course which was part of NATO’s Partnership for Peace program. On February 19 he was axed, while asleep, by his fellow Azerbaijani participant, Lieutenant Ramil Safarov. The murder took place at 5 am, while the victim was asleep. Margaryan’s Hungarian roommate, Balázs Kuti, remembers that on the evening of February 18 he had tea and went to bed, as he had a fever, while Margaryan busied himself with his studies. Around 9:30 pm, Margaryan went to visit another program participant from Armenia, Hayk Makuchyan, who was staying in another room.
Kuti does not remember when Margaryan returned, but early in the morning he felt that someone had turned on the light. He thought it was Gurgen returning to the room, but after hearing some muffled sounds, he turned his head away from the wall and saw Safarov standing by Margaryan’s bed with a long axe in his hands:

By that time, I understood that something terrible had happened for there was blood all around. I started to shout at the Azerbaijani, urging him to stop it. He said that he had no problems with me and would not touch me, stabbed Gurgen a couple of more times, and left. The expression of his face was as if he was glad he had finished something important.

A postmortem concluded that Safarov had delivered sixteen blows to Margaryan’s face, nearly severing his head from his body. Earlier, a briefing given by the Hungarian police added that Margaryan had also been stabbed several times in the chest. After he killed Margaryan, Safarov went forward with his plan to murder Makuchyan, but discovered his door was locked. In the meantime, Kuti had run out of his room and summoned the police, who promptly arrived at the scene and arrested Safarov. During interrogation he confessed to killing Margaryan. A Budapest policeman commented that the murder had been conducted “with unusual cruelty,” adding “beside a number of knife wounds on his chest, the victim’s head was practically severed from his body.”

On April 16, 2006, the court sentenced Safarov to life imprisonment without possibility of appeal until 2036. The judge, Andras Vaskuti, cited the premeditated nature and brutality of the crime and the fact that Safarov showed no remorse for his deeds as the reasons for the sentence. On February 22, 2007, a Hungarian court upheld the ruling following an appeal filed by Safarov’s lawyer.

In late August 2012, however, Hungarian authorities agreed to release and extradite Safarov to Azerbaijan to serve the remainder of his sentence there. Though the Hungarian government stated that it had received assurances from the Azerbaijan government that the sentence would be enforced, President Ilham Aliyev issued a pardon immediately upon Safarov’s arrival to Baku and ordered that he be “freed from the term of his punishment. Safarov has since been promoted to the rank of major and provided with accommodations by the Azerbaijan government.